The #UDHRquilt Project is a collaborative craftivism project that both celebrates the UDHR and interrogates the current state of human rights. Started in 2017 by artists Stephanie Dunlap and Tal Fitzpatrick, this project culminated in the donation of $26,200AUD to UNHCR in February 2020 made on behalf of the 131 artists who participated in this project. All four of the UDHR Quilts are now part of the permanent collection of the Museum of Australian Democracy, at Old Parliament House Canberra, Australia.
Visit the UDHR Quilt Project Website 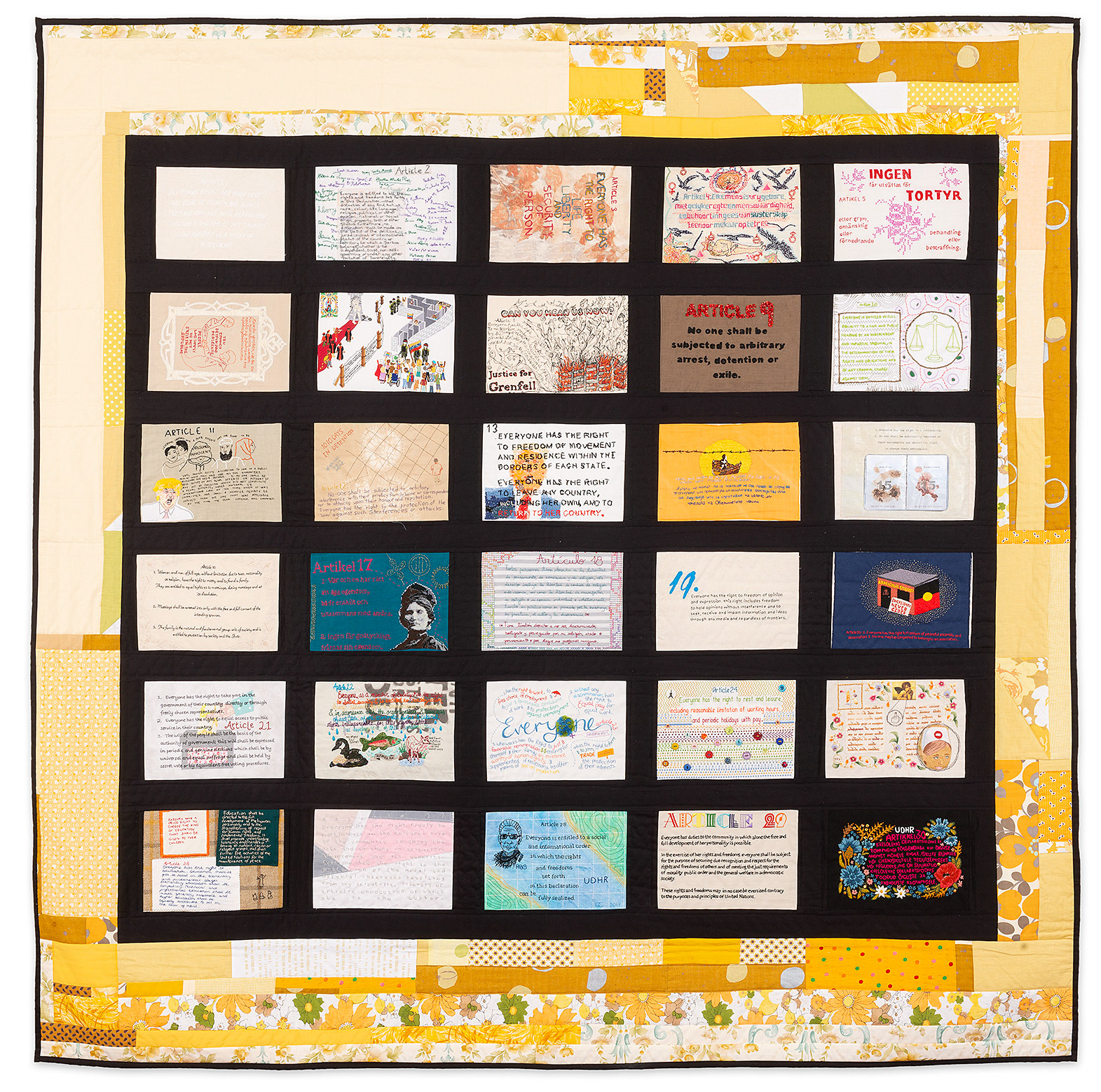 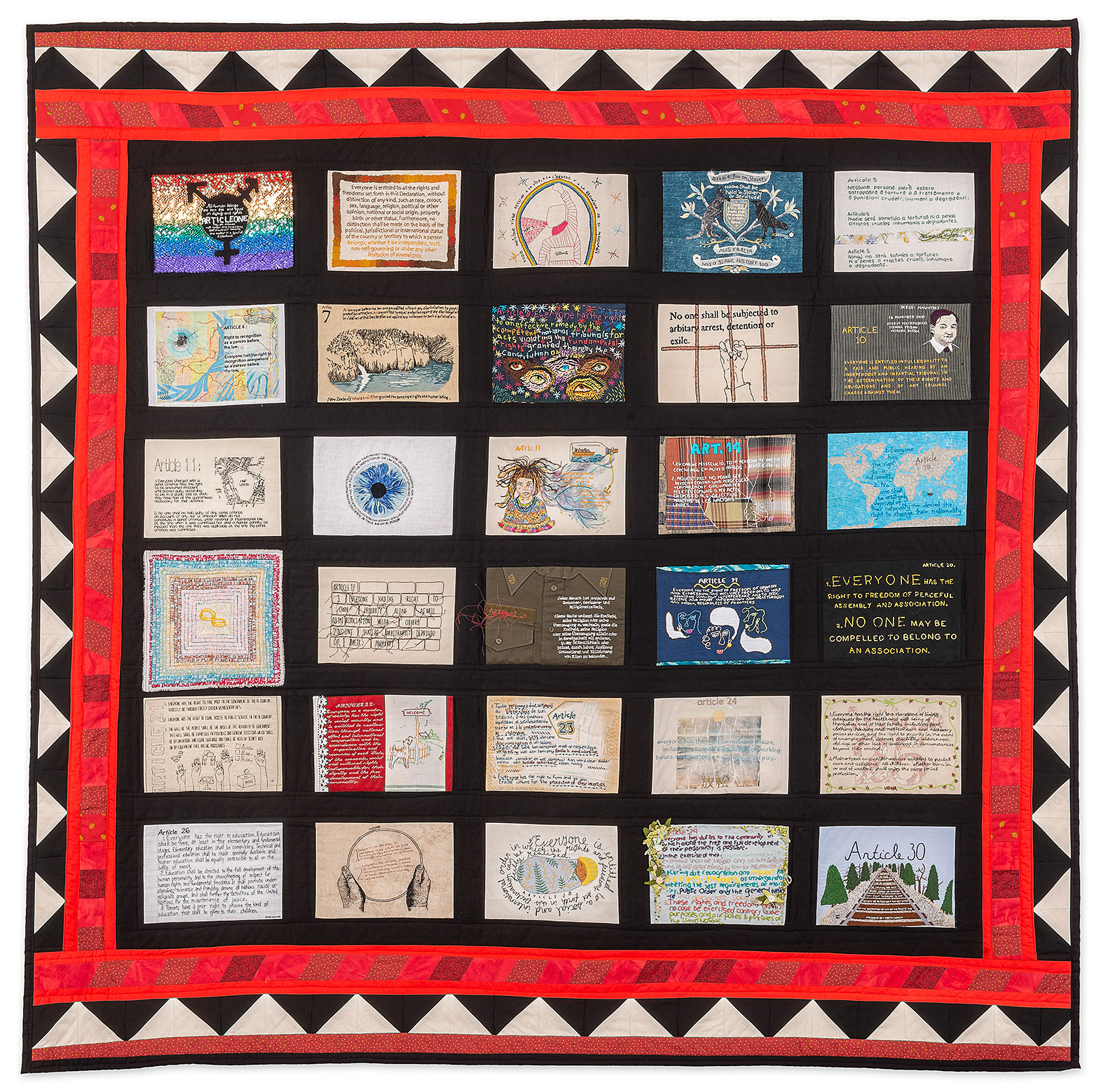 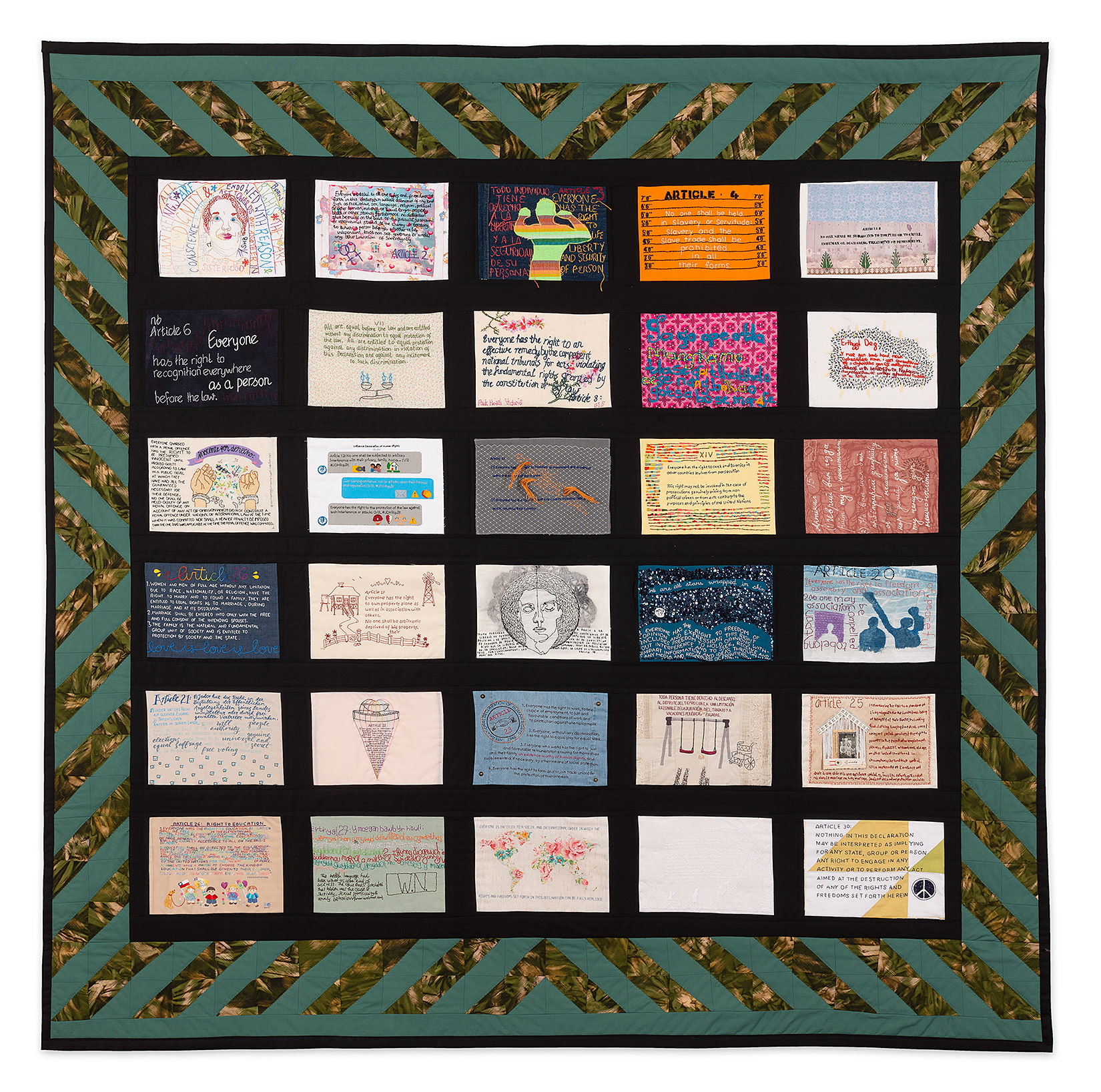 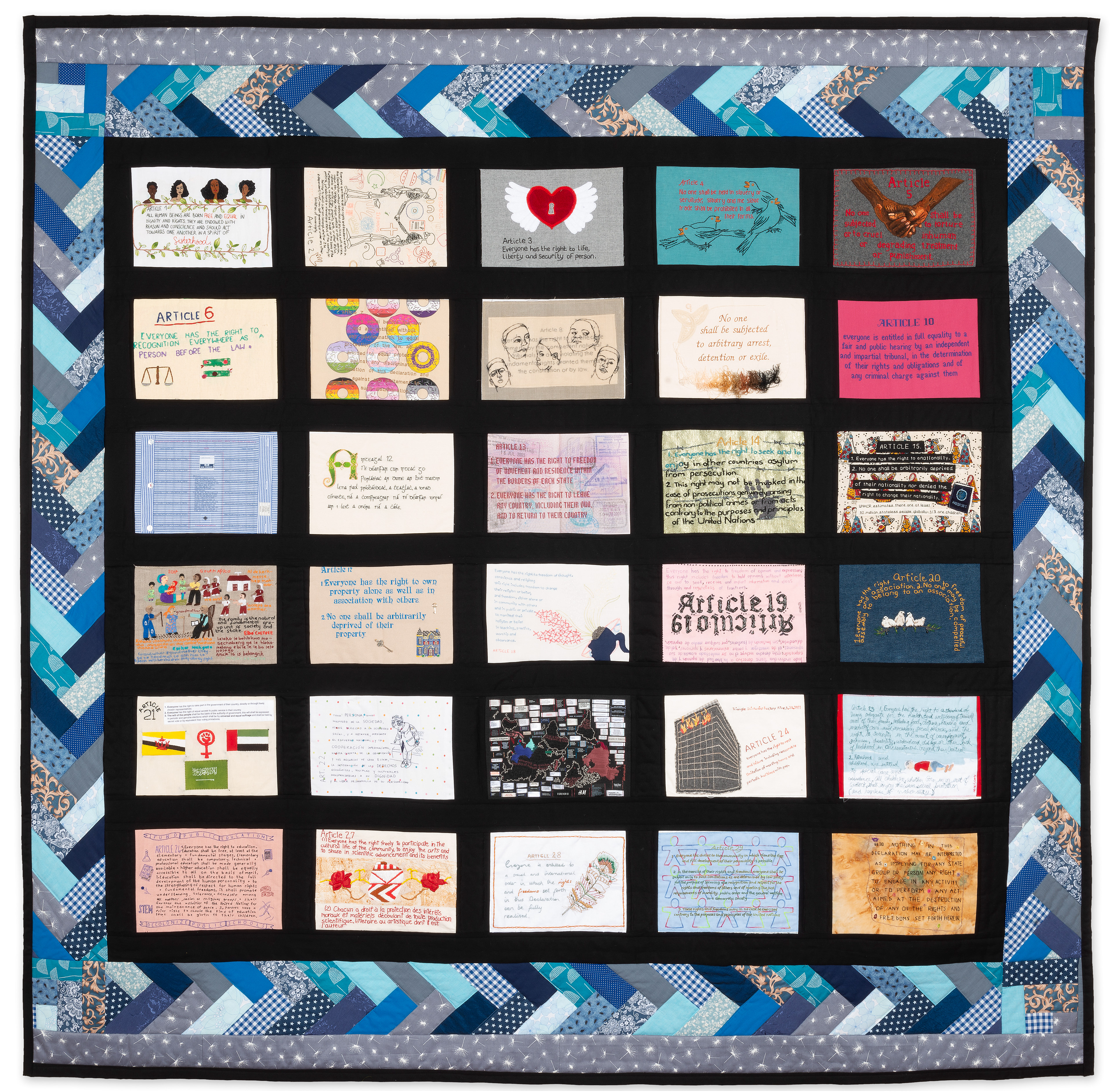 the UNIVERSAL Declaration of Human Rights QUILT PROJECT
The Universal Declaration of Human Rights Quilt Project - or #UDHRquiltProject is a global collaborative craftivism project that involves 131 artists representing 45 different nationalities.
At a time when the patchwork of liberties is fraying, craftivism is a global movement that combines craft and activism into quietly powerful protest to call for social and political change. Craftivism allows people to actively engage in democracy, contribute to social change, and transform the world one stitch at a time. Driven by the power of craft and social media to tell stories the UDHR Quilt Project looks to start complex conversations about human rights issues in the world today.
In early 2017, aided by the power of social media, project coordinators Stephanie Dunlap (Phoenix, USA) and Tal Fitzpatrick (Melbourne, Australia) put out a call out for collaborators. Within 3 days they had 131 craftivists from across the globe sign up to stitch one of the article of the UDHR.
Through the creation of the four 2m x2m UDHR quilts, each embroidered with the 30 articles of the Universal Declaration of Human Rights, this project draws attention to the way human rights are challenged around the world today. Each artist found ways to sew messages into their quilt block that would  inspire audiences to think, engage and reflect on how they might take action to defend human rights. 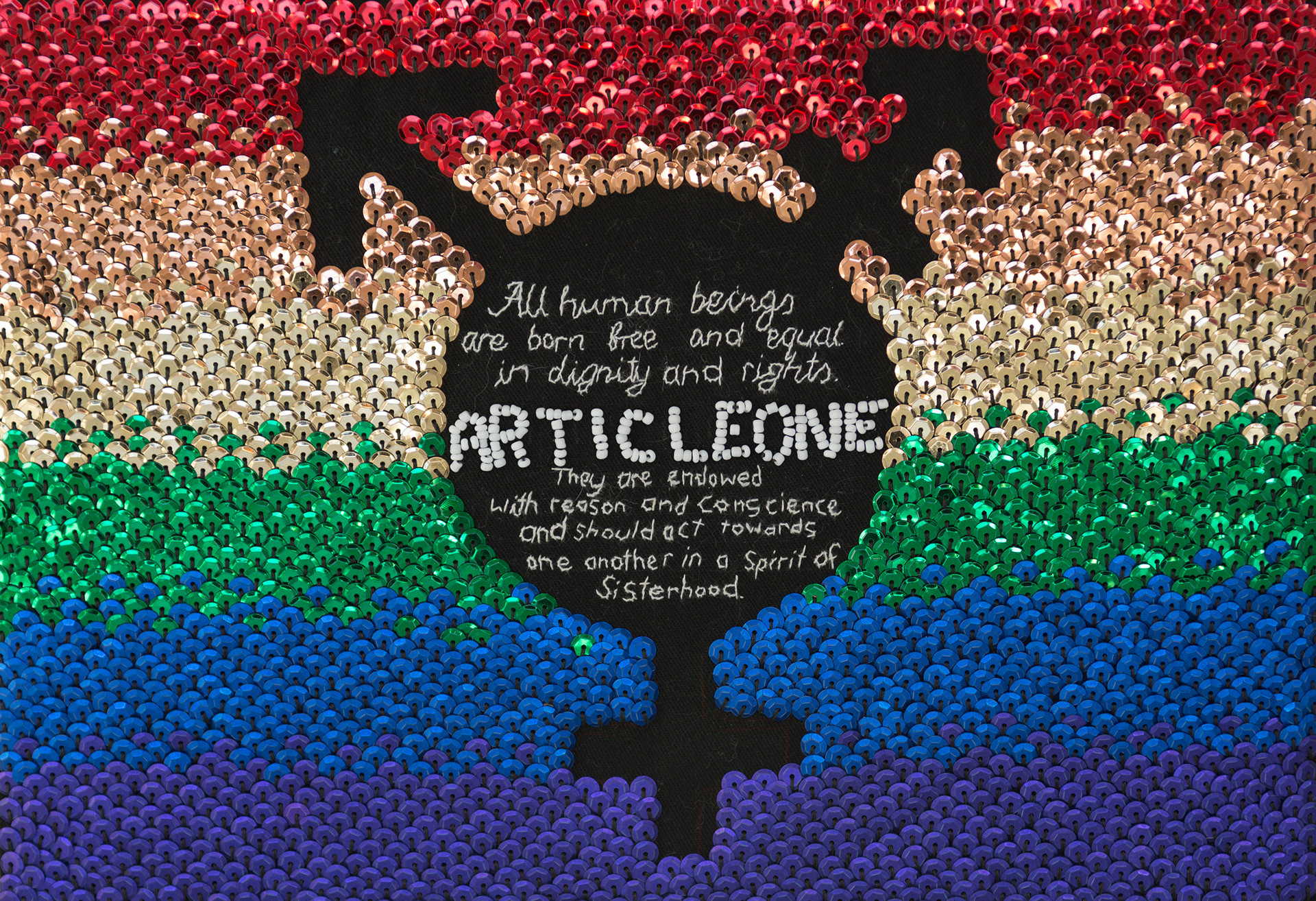 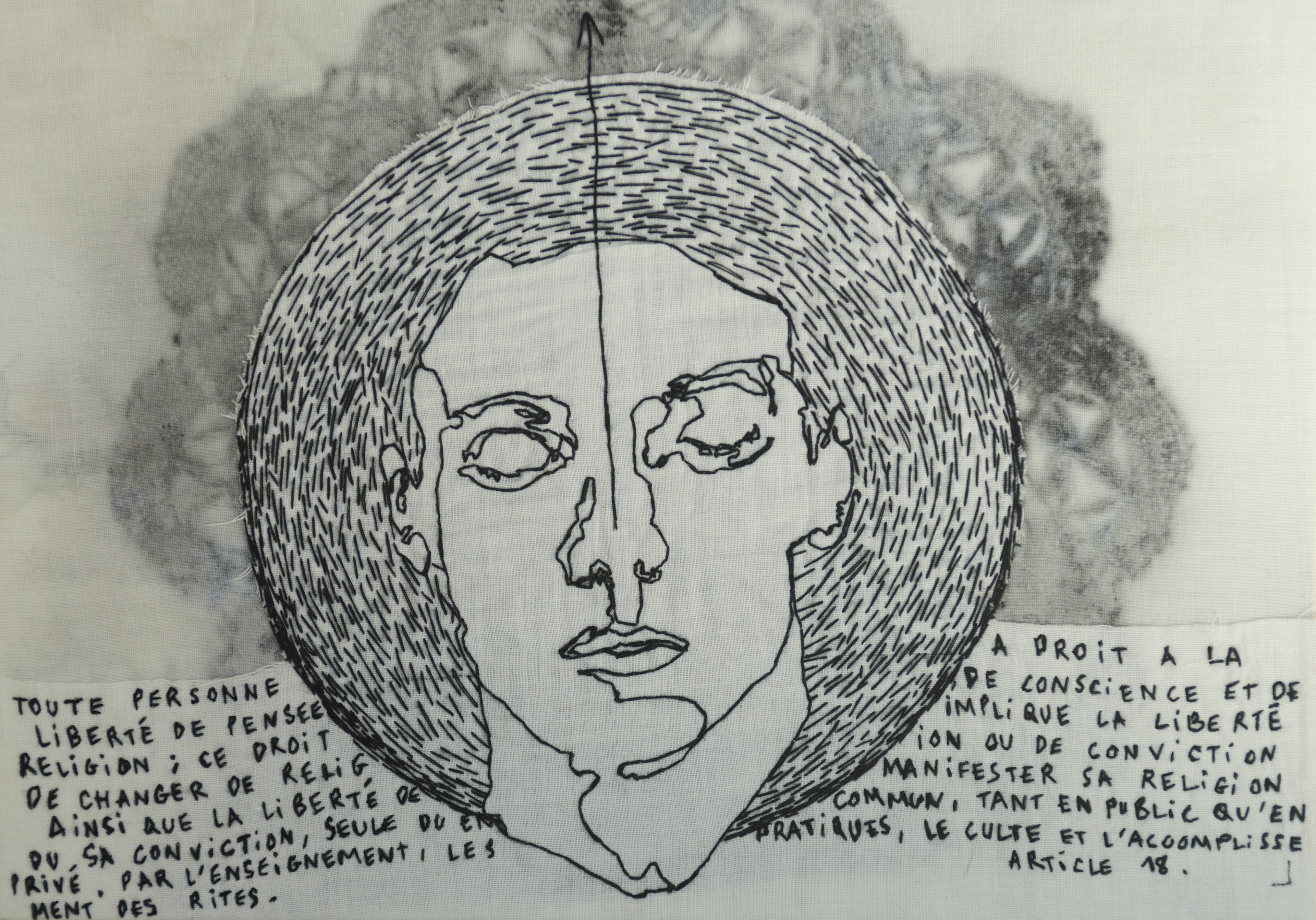 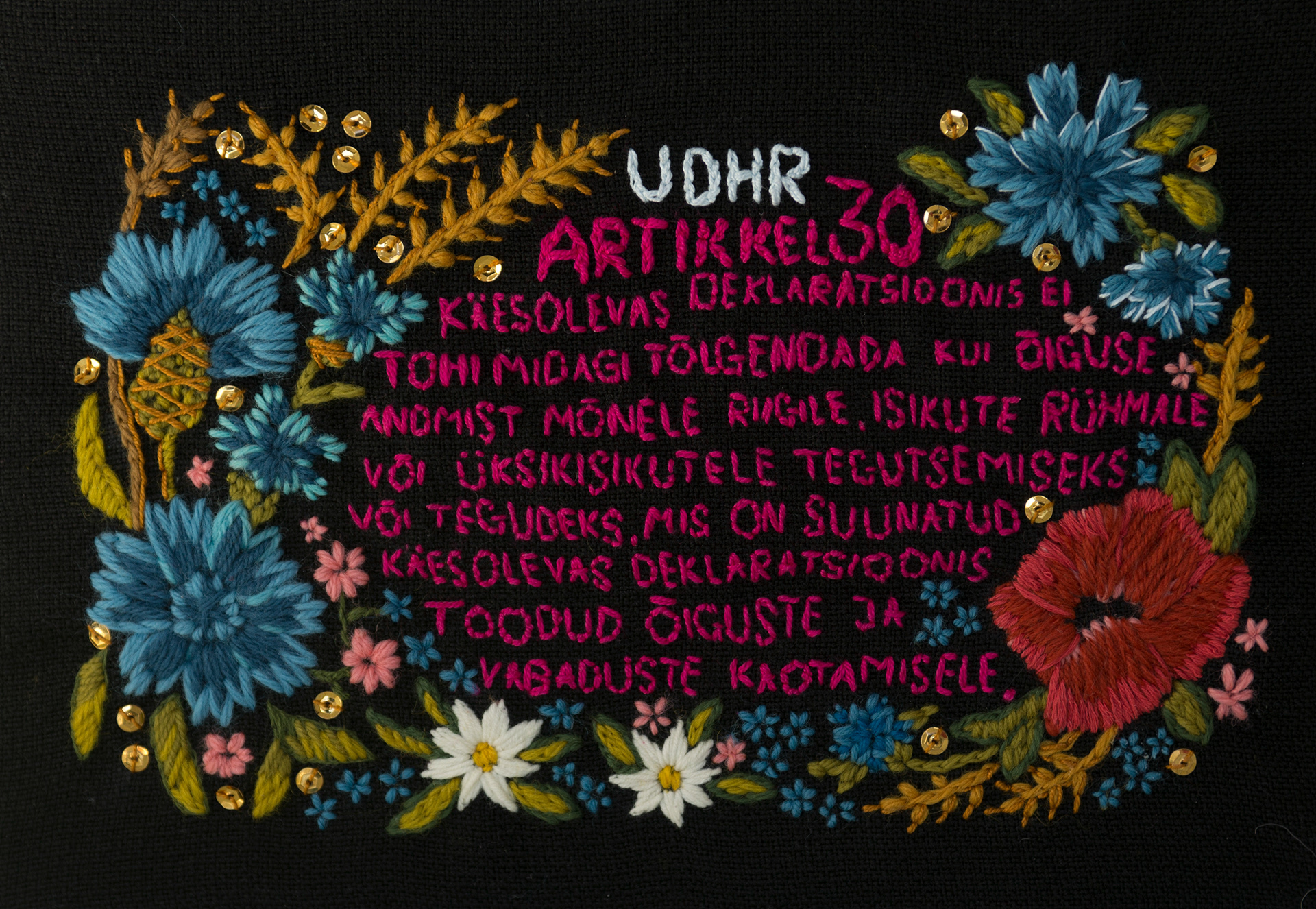 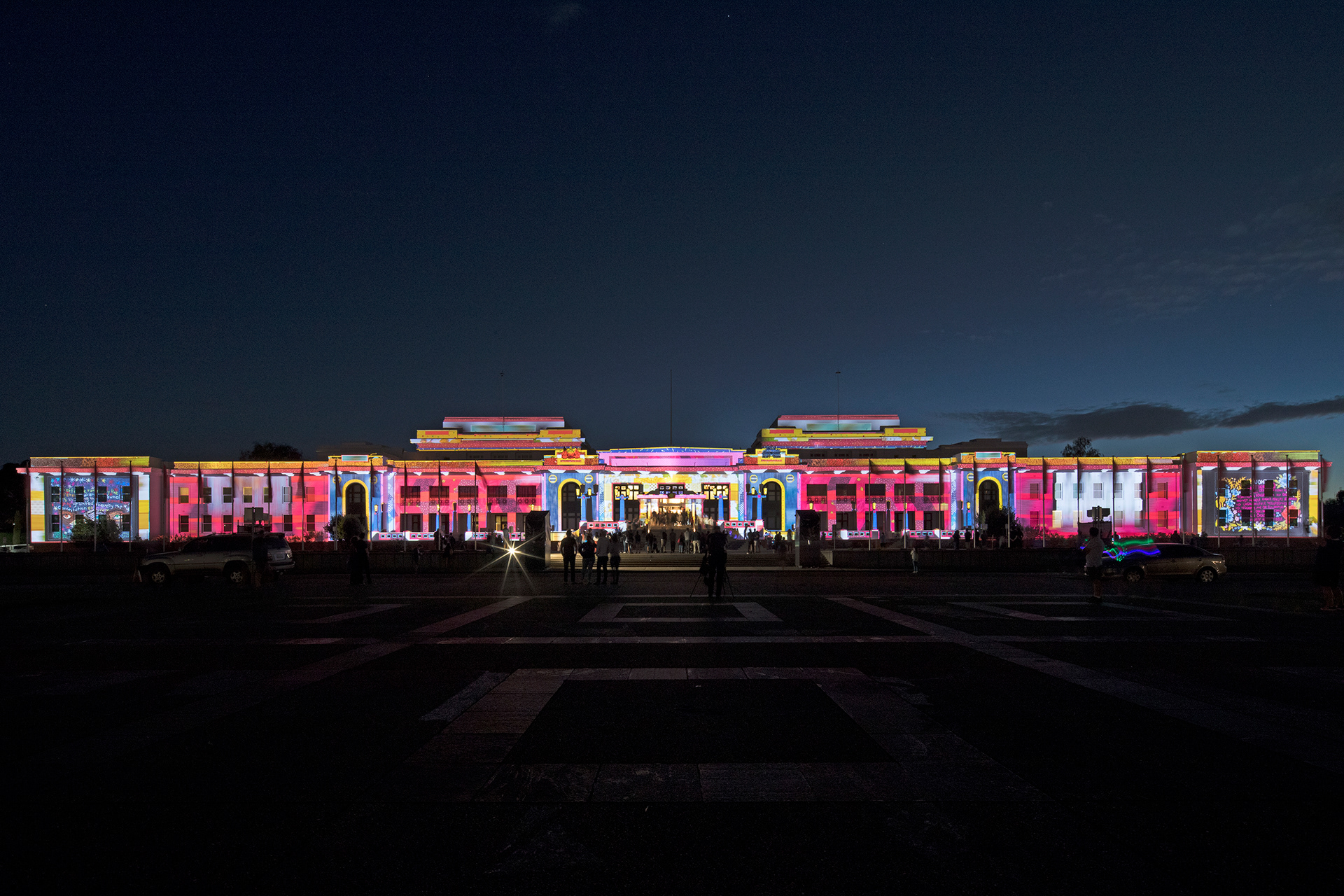 the #UDHR QUILT PROJECT EXHIBITION
The #UDHRQuiltProject exhibition was launched at the Museum of Australian Democracy, at Old Parliament House, Canberra as part of the official United Nations Day event on the 24 October 2018. The exhibition continued until the March 10, 2021.
The #UDHRQuiltProject exhibition moved beyond a traditional museum experience by inviting visitors to get involved. Visitors could immerse themselves in craftivism by participating in a range of hands-on craft activities, workshops and community-based events.  Tal Fitzpatrick facilitated several special events throughout the exhibition including workshops and discussions on the everyday practice of democracy through craft. 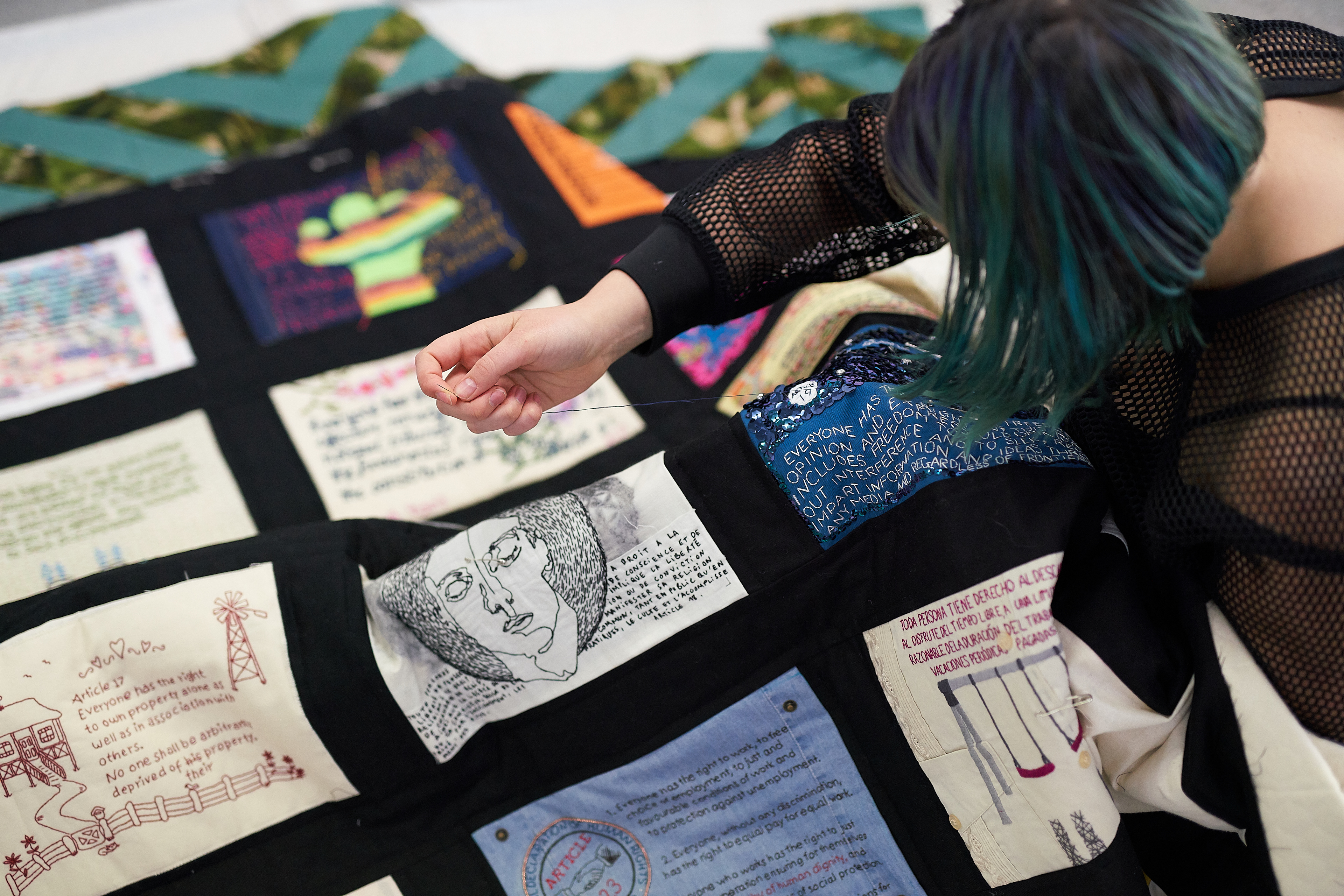 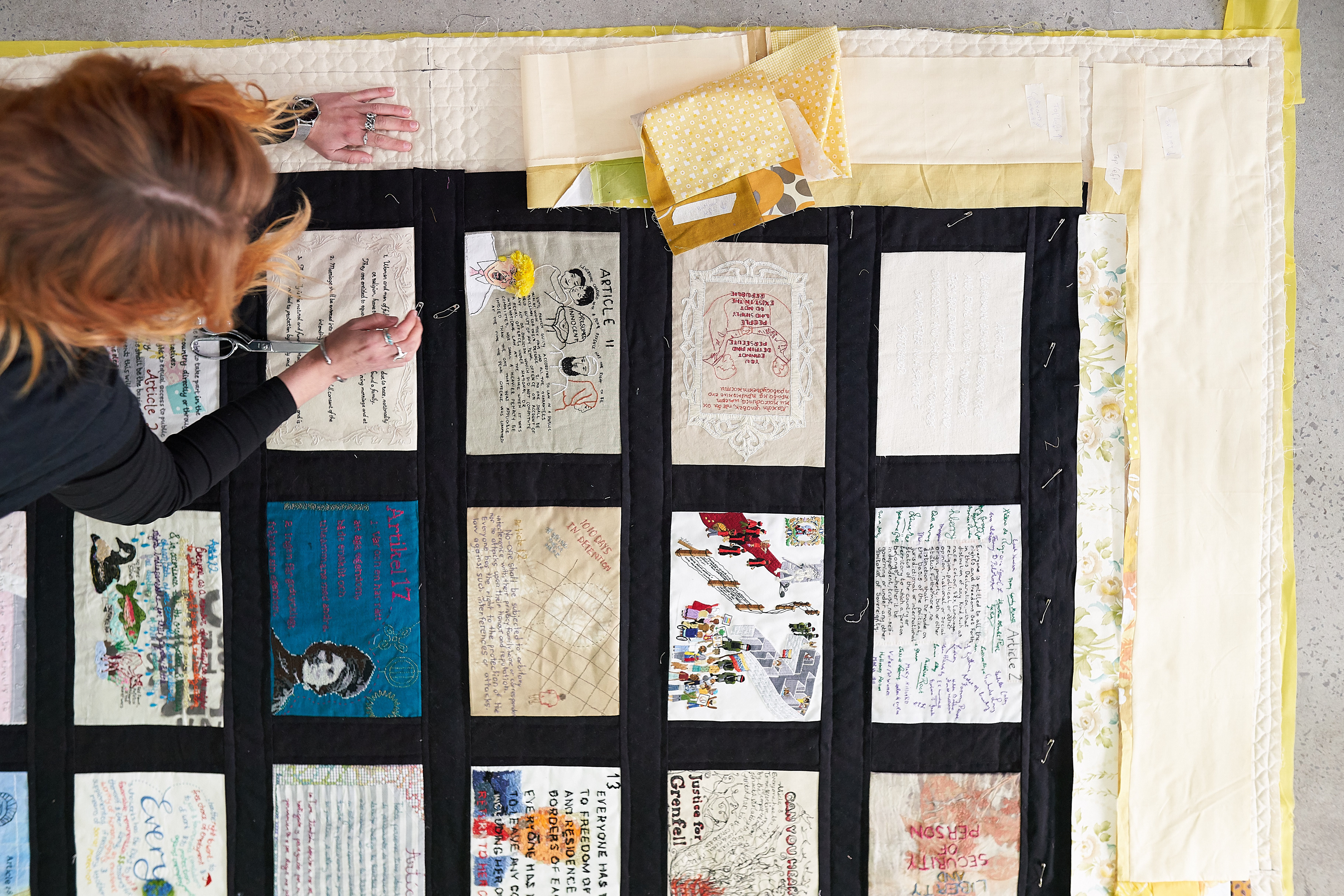 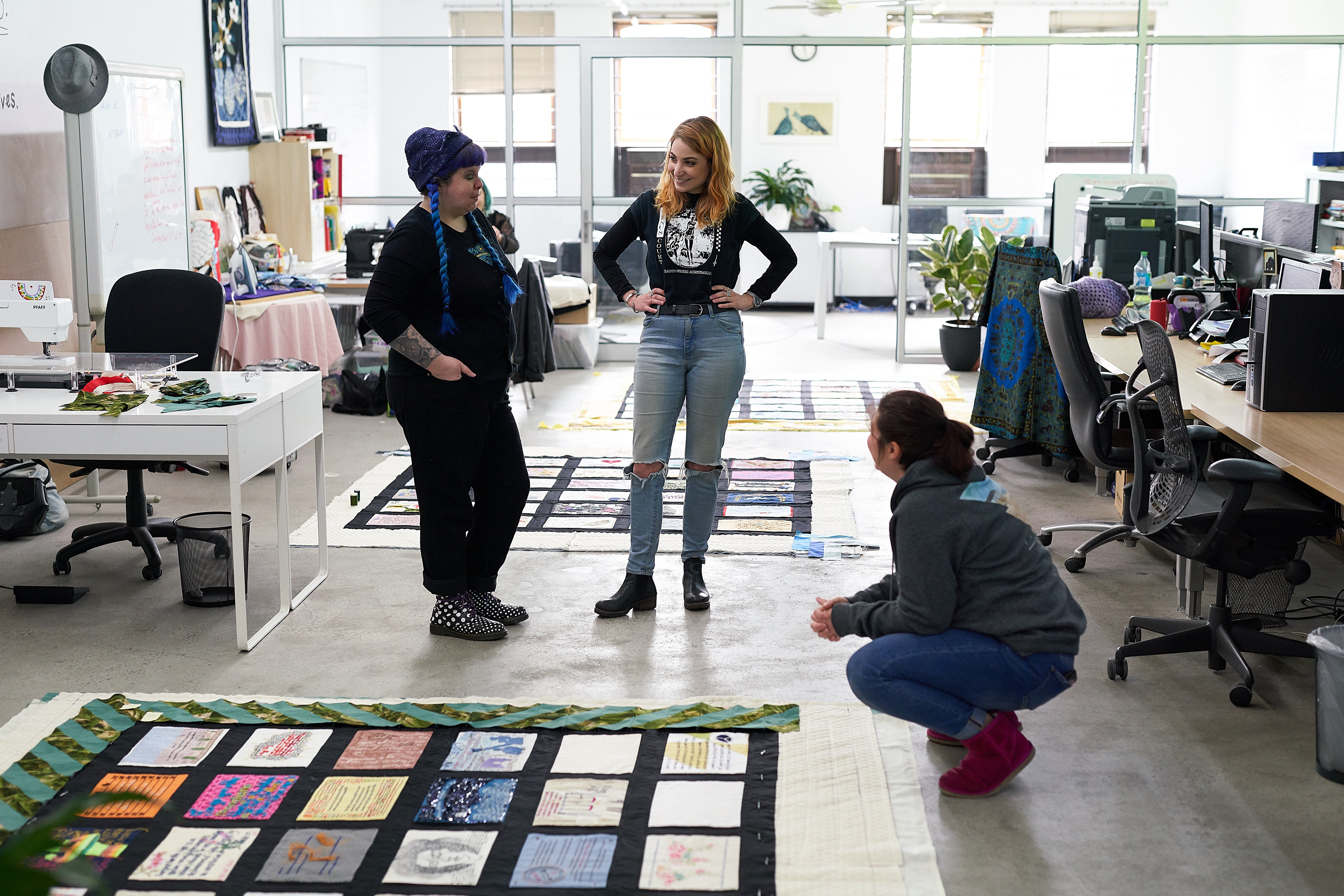 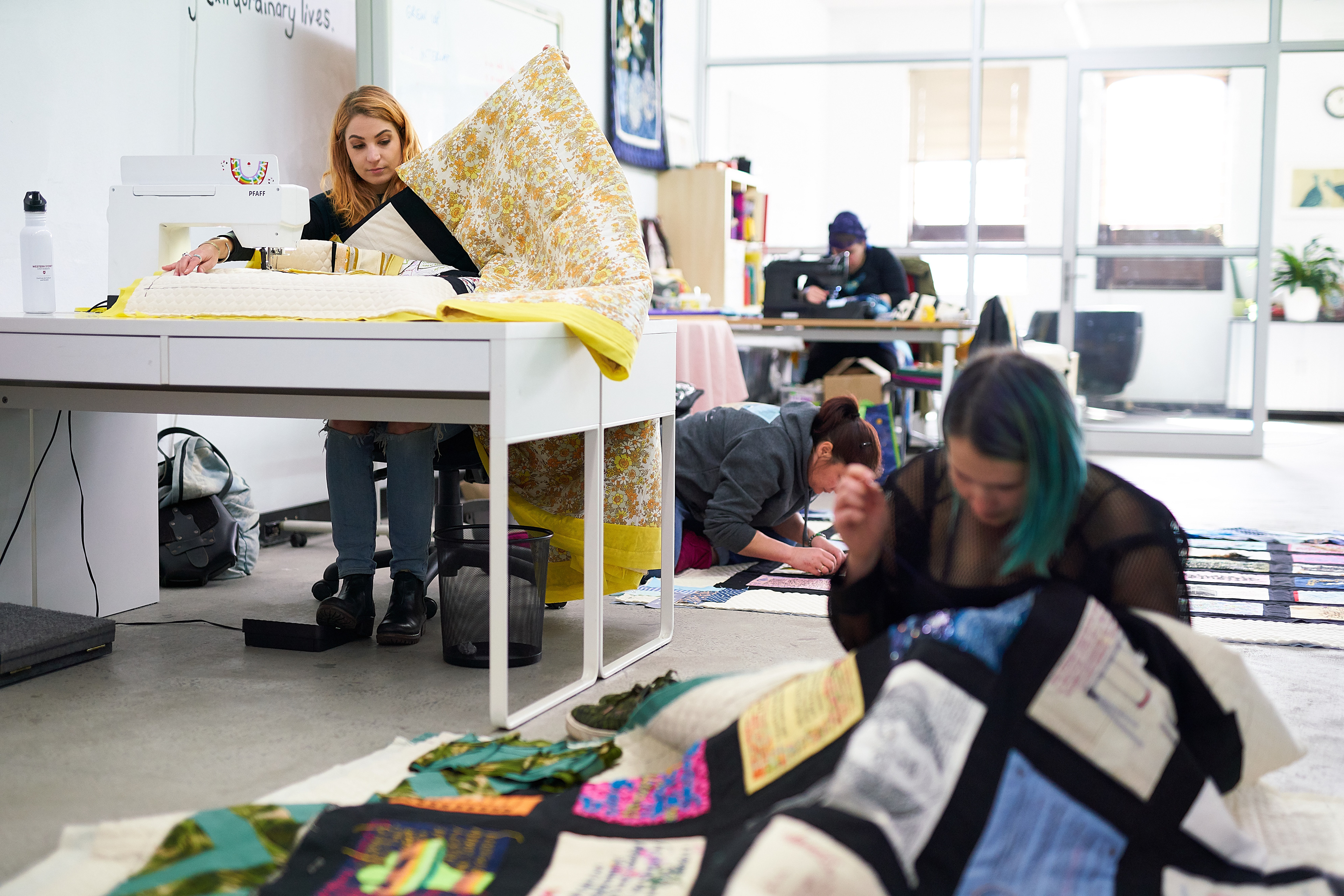 Project Coordinators
Stephanie Dunlap (@illuminatembroidery) is a multidisciplinary artist, student, and activist from Phoenix, Arizona who creates under the moniker illuminate. They work individually and communally to create accessible art that engages with the global community on an individual level. While varied, their larger body of work delves into themes of pattern recognition, intersectionality, and self-efficacy as a way of understanding and emphasizing an individual’s vital role in our global community.
Tal Fitzpatrick (@talfitzpatrick) is a PhD candidate with the Centre for Cultural Partnerships at the Victorian College of Arts, University of Melbourne, Australia. She is an artist, craftivist and community development worker. Her participatory approach to the practice of Appliqué quilting is driven by her fascination with the power of craft to solicit the sharing of stories and ideas. In her creative practice as well as in her practice-based research Tal looks to unpack how we might drive social and political change by using art as a way to engage diverse groups of people in complex conversations. As part of her creative process Tal engages with the public as well as with community groups and charity organisations on projects that explore issues such as women’s rights, disaster resilience and the everyday practice of democracy.
Contact: udhrquilts@gmail.com 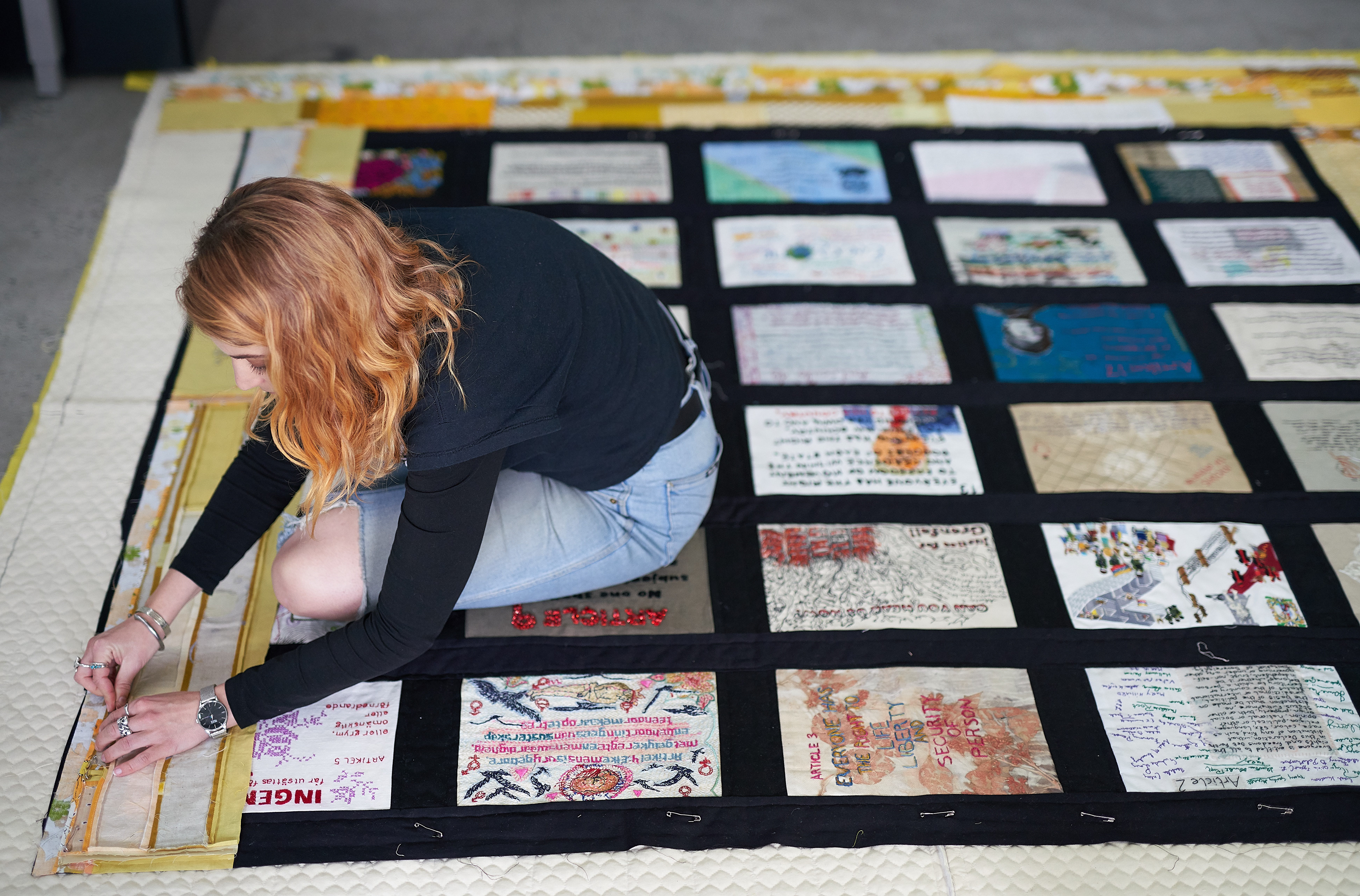 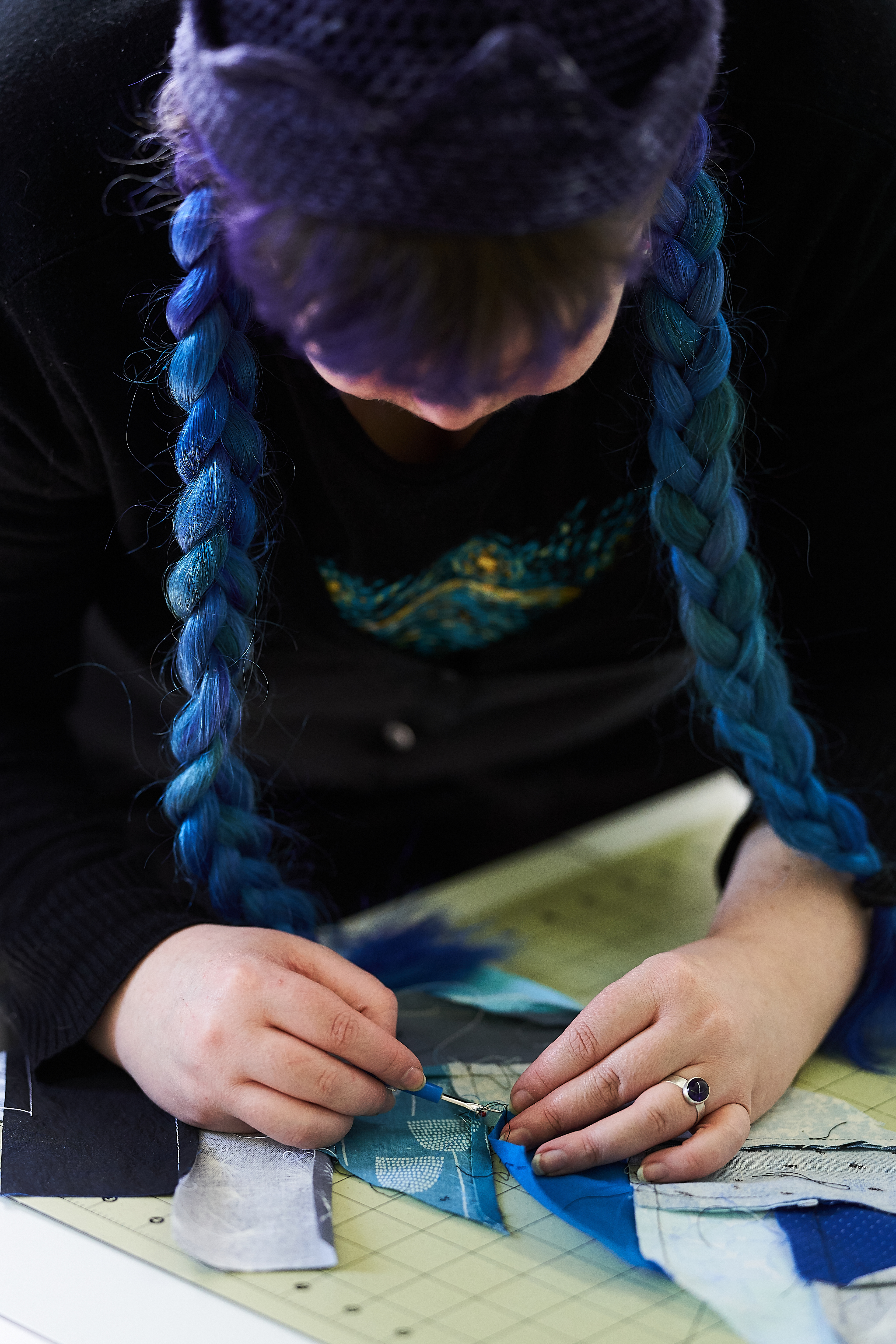