The PM (Prime Minister) Please Quilt is a socially engaged artwork made in the style of an Australian wagga quilt. This quilt was created as a gift for the then newly appointed Prime Minister Malcolm Turnbull, back in October 2015. The quilt was made using second-hand ties and suit swatches and is adorned with 121 hand-stitched messages to the prime minister, each beginning with the words PM Please. On the 20th of March 2017 the quilt was donated by the artist, along with a letter from Malcolm Turnbull in response to the project (see below), to the Museum of Australian Democracy at Old Parliament House, Canberra.

Letter from the Prime Minister Malcolm Turnbull to Tal Fitzpatrick written in response to the PM Please Quilt project.
ABOUT THE PM PLEASE PROJECT
The idea for this quilt came in October 2015, not long after Turnbull (yet another new Prime Minister) was sworn into office. At the time there was a very palpable shift in the way people perceived the government as a result of the latest leadership change, a shift marked by a renewed hope that it may once again be possible to engage in more complex and inclusive dialogue about the future of Australia. With a federal election less than 12 months away I felt that there was no better time to reach out to the Prime Minister in order to try communicate what’s really important to us ordinary citizens.
With this project idea in mind I successfully put forward an application to perform the making of this work as part of the HillsceneLIVE art festival which was held in Monbulk, VIC on the 30th of October 2015. In the three weeks leading up to the festival I used social media to collect a total of 121 messages for the quilt (full list at the end of this page). With the help of 23 festival goers, I hand-stitched every single message I received onto suit swatches without making any changes or omissions to the messages I was sent. I then used these embroidered suit swatches, along with a bundle of second-hand ties as patches for the quilt which also features an appliqué portrait of Turnbull holding beloved dog Mellie, who sadly passed away in 2013.
The idea behind this project was to find a creative and generous way to reach out to the new Prime Minister and communicate the issues and concerns of everyday citizens who wanted to reach out and have their voices heard by their new leader. In this way this artwork is about democracy – it is about the right of citizens to voice their concerns and have the issues they feel passionately about acknowledged and addressed by their elected leaders.
Following the completion of this quilt I spent about 8 months trying to leverage my social capital in order make contact with Turnbull so that I might give him the quilt as a gift on behalf of all the people who contributed to this project. However, with the 2016 election coming up fast I decided to drive to Turnbull's office in Sydney and hand the quilt over in person. His office accepted the quilt and two days following the announcement that Turnbull was elected the Prime Minister I received a call to say that the PM had seen the quilt, that appreciated the work that went into making it and that he was happy to accept this gift.
I borrowed the work back for an exhibition I had at the George Paton Gallery in September 2016 and when I wrote to the PM's office to arrange returning the quilt I was told:  "It may be best to hang on to it for yourself as a memory of your achievements, as there are restrictions around what Mr Turnbull can accept as personal gifts with the registry so it may end up halted in our office."
After receiving this message I negotiated to have the PM Please quilt donated to the Museum of Australian Democracy, Old Parliament House, Canberra. The hanging was accepted by the museum's acquisition committee and became part of the permanent collection as of the 20th March 2017.  Also part of the museum's collection is my grandmother Dawn Fitzpatrick's artwork "The Prime Ministers at the Marble Bar" (1983/97) which is a large textile wall hanging featuring a portrait of every Australian Prime Ministers from 1901 until 2007.
Read more about the quilt handover at: https://moadoph.gov.au/blog/pm-please-quilt/ 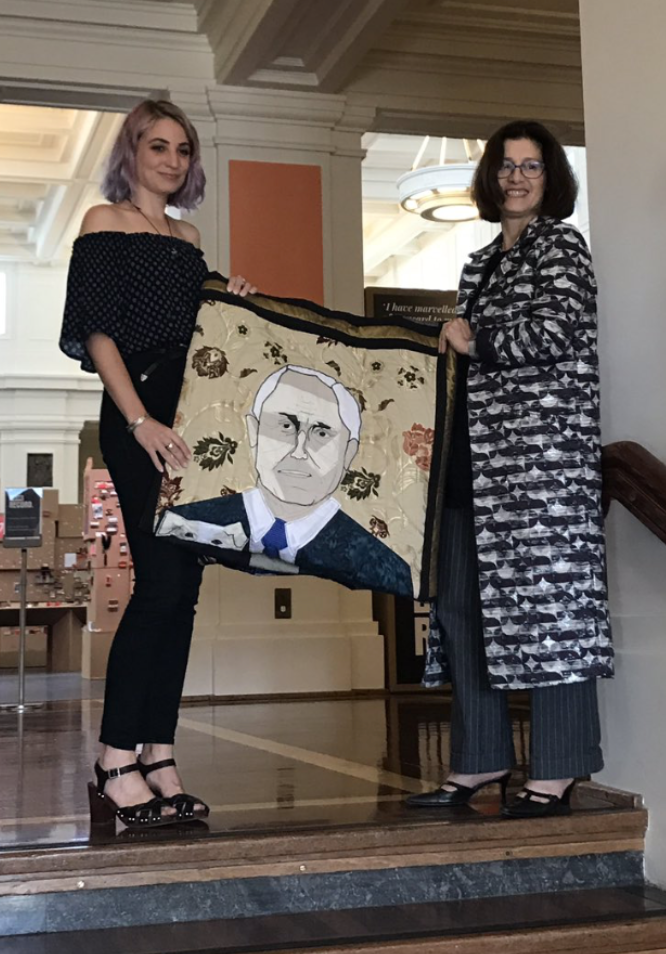 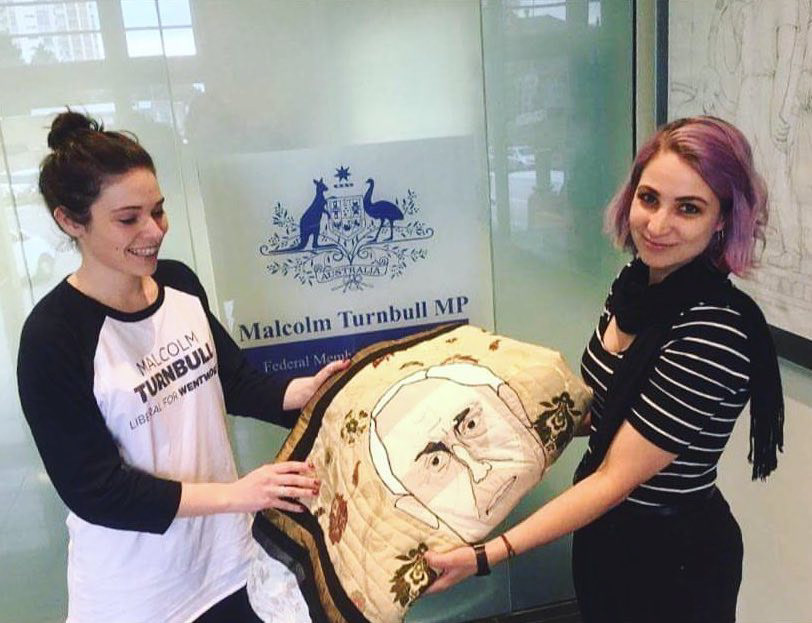 Work in progress, a participant hand stitching their message onto a suit swatche for the PM Please Quilt at HillsceneLIVE festival in Monbulk, Vic.

Details from a selection of the hand embroidered messages on the PM Please Quilt (above and below).

Installation for the participatory performance of the making of the quilt at HillsceneLIVE 2015 in Monbulk, Victoria.  corner

Finished quilt, image courtesy of Fairfax (2016)
↑Back to Top