Resist (2019) 83cm x 55cm
By Tal Fitzpatrick and Sayraphim Lothian
Machine quilted, appliqué protest banner made using felt and recycled material and cotton thread.
The text at the centre of this banner was created by Sayraphim Lothian’s as part of a trial run fora project she included in her book ‘Guerrilla Kindness and Other Acts of Creative Resistance.’ I bought her work from her and with her permission finished it off by making it into a quilted banner.

Home Safe (2019) 47cm x 100cm
Machine quilted, appliqué protest banner made using new and recycled material, cotton thread, hand stitched sequins, long tassels, cotton thread and wooden dowel.
On January the 16th 2019, the body of exchange student Aya Maasarwe (21) was found behind a hedge near a shopping centre in Bundoora, north of Melbourne. Aya Maasarwe was attacked while she was making her way home from a comedy show. Heartbreakingly, she was not the first or the last women to lose her life to the epidemic of violence against women in Australia. As  of 29/5/2019, 20 women have already been murdered this year. In 2018 the number of women killed reached 69. This banner pictures the tributes lain down at the site where Aya Massarwe was murdered and is an expression of loss, anger and grief. The work quietly and determinedly insists that change must come.
I would like to acknowledge the ‘Counting Dead Women Australia’ researchers of ‘Destroy The Joint’ for the data used above and for the heartbreaking and difficult work they do.
This banner was exhibited as part of 'Beyond 50%' at Backspace Gallery (2019) in Ballarat and at G1+G2 Gallery (2019) in Melbourne and at the Museum of Australian Democracy, Old Parliament House, Canberra as par of the UDHR Quilt Project Exhibition (2020). 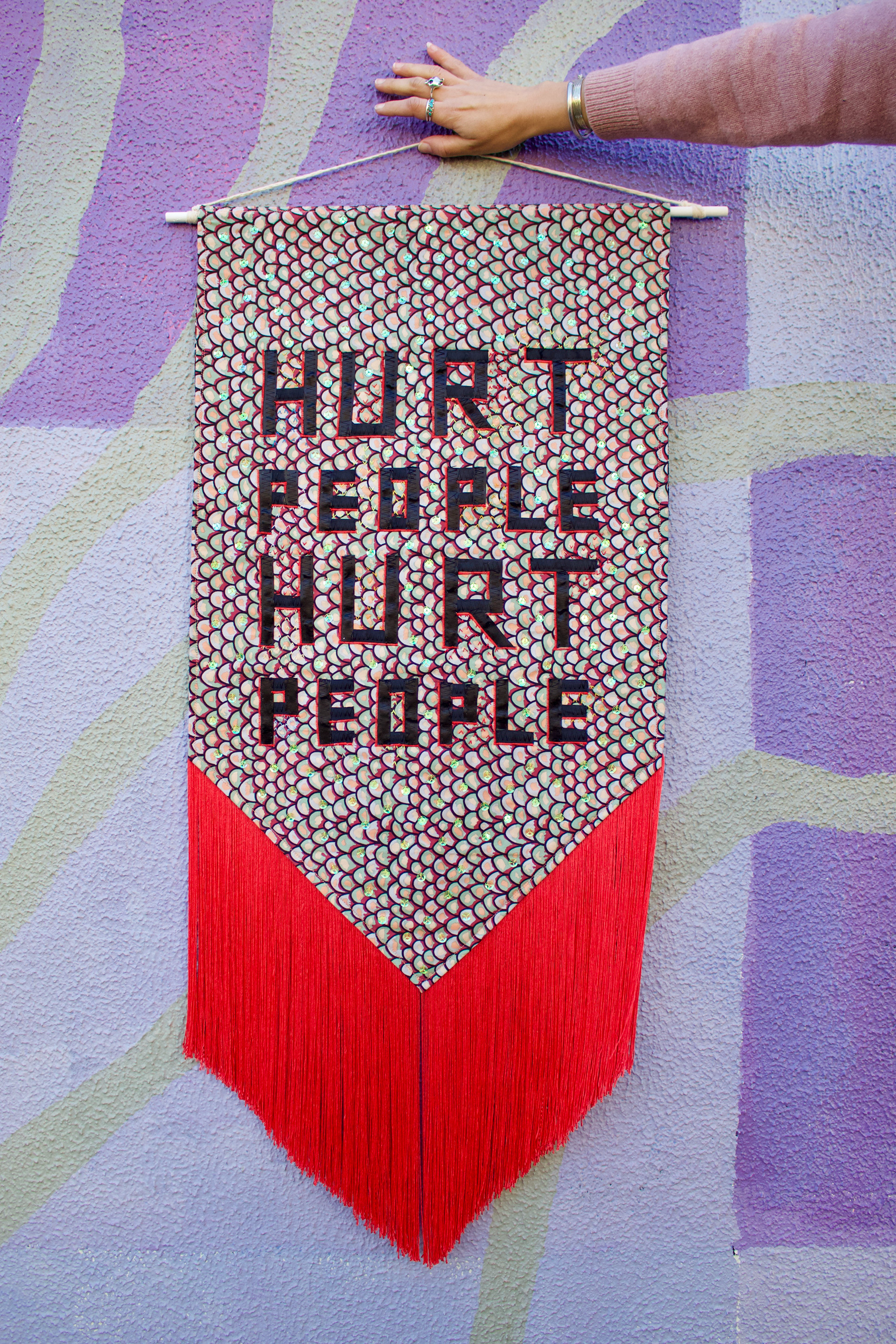 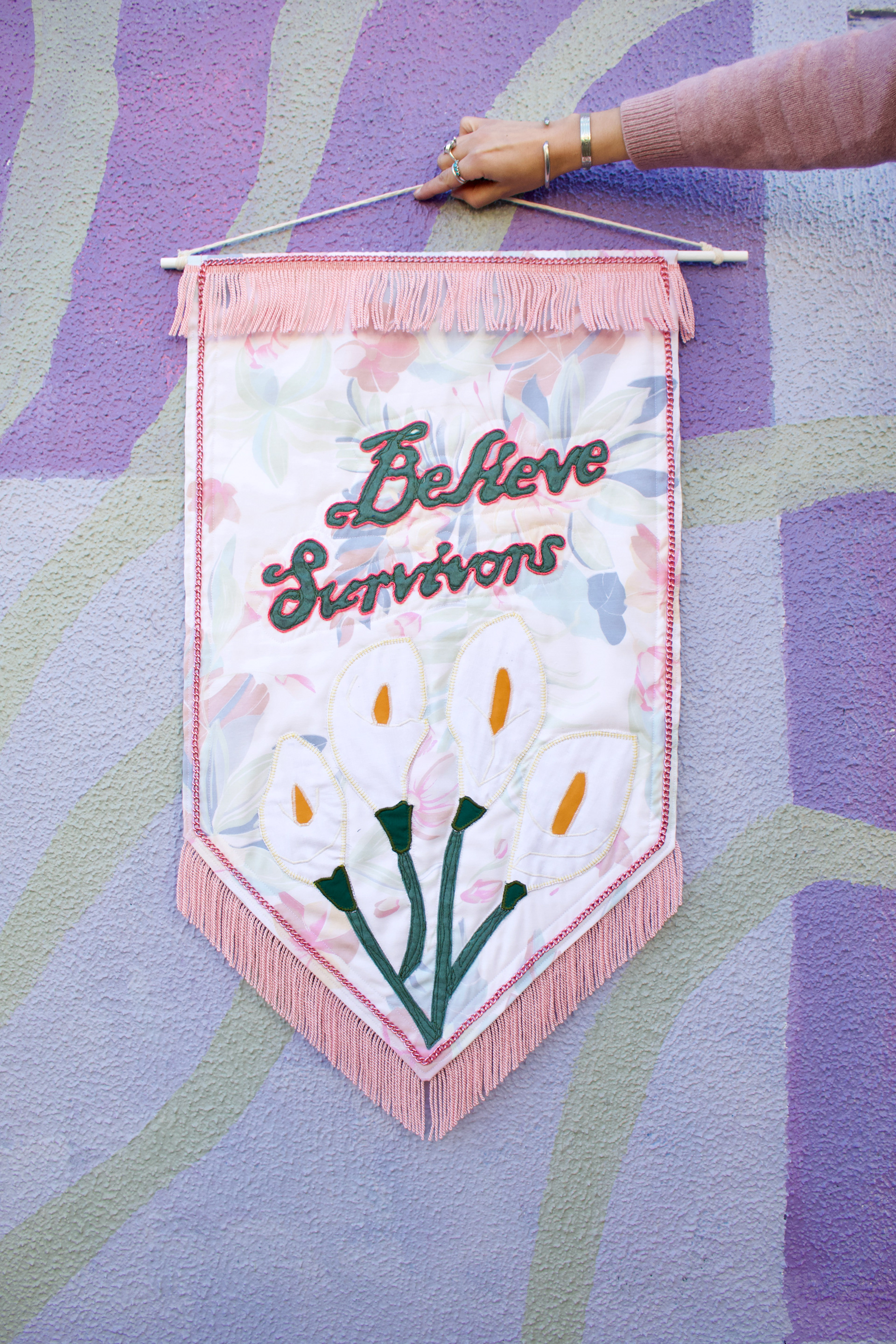 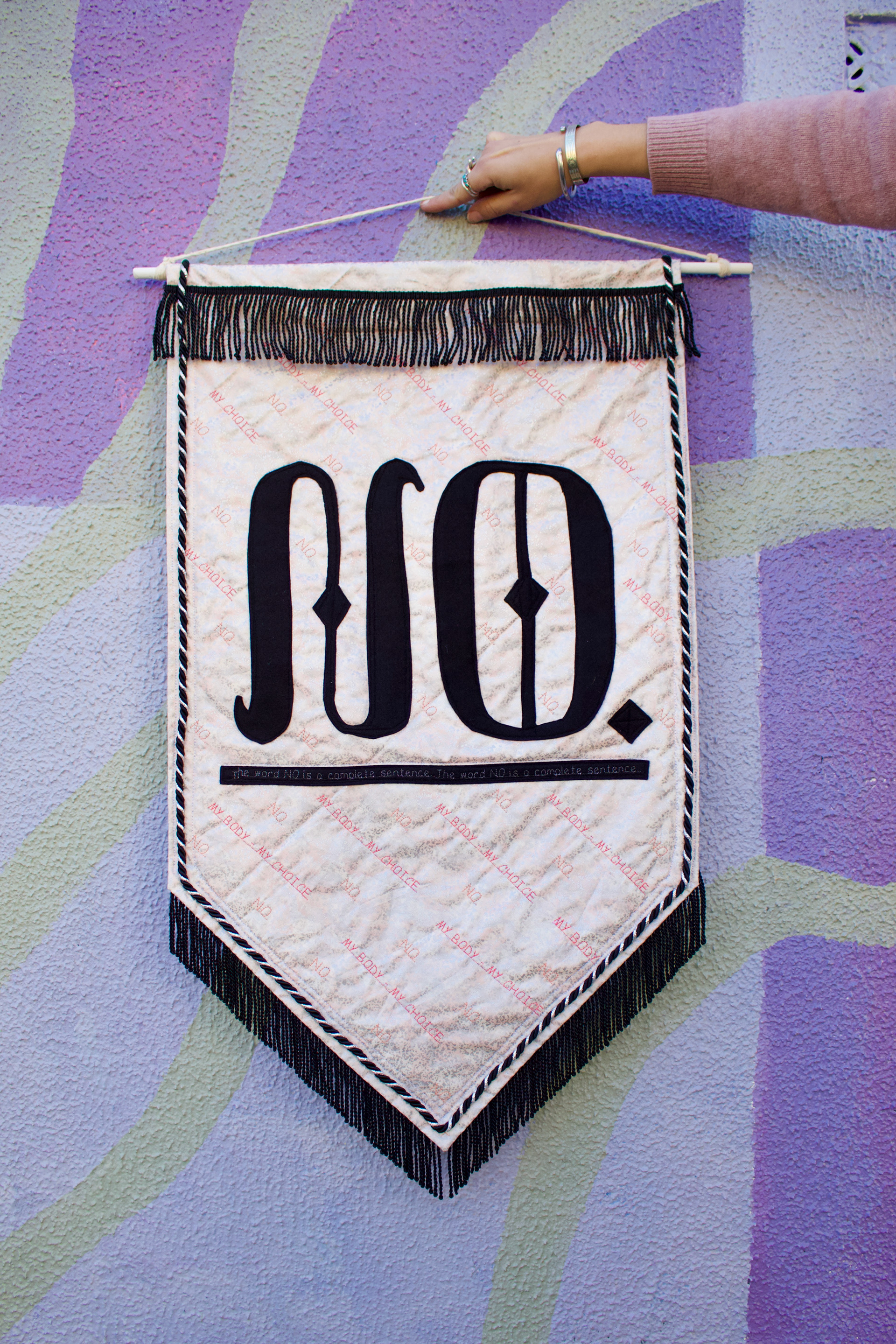 Holding up Protest Banner at Women’s March in Melbourne's CBD (21 January 2017)
This image was captured and shared by Australian musician Courtney Barnett.

Holding up Protest Banners at Black Friday Rally in Melbourne's CBD (13 March 2015)
This protest was held to show opposition to the Government's forced closure of Aboriginal communities in Western Australia.

Resilience, Resistance and Responsibility (2015) 200cm × 200cm
Appliqué quilt made using new and recycled materials.
This piece was created as part of my research into craftivism as a mode of active citizenship. It was undertaken in partnership with Emerald Community House (ECH) and took the shape of an informal residency undertaken at ECH in Emerald, Victoria. During my residency I collected stories from local community members about what makes them/their community resilient and I patched these stories together into the above quilt.

The Igniting Change Bookcase Story Quilt (2015) 130cm × 217cm
This quilt was made during a 4 week resident at the office of the Melbourne based charity Igniting Change. This project was part of my PhD research into Craftivism and the Political Moment at the VCA, University of Melbourne. The quilt was created in order to help Igniting Change communicate the impact of their diverse work. It acts as a story telling devise that invites questions and starts conversations about the work of Igniting Change. I donated this hanging to Igniting change, it now hangs in their office in Balaclava. As a result of the strong relationship that fostered with the Igniting Change team as a result of this project the charity invited me to take up permanent residence at their Balaclava office. Since setting up my sewing studio and office at Igniting Change we have collaborated on many other projects.

'Always Was Always Will Be Aboriginal Land' (2017) 70cm X 54cm, SOLD
This mini protest banner was made in time for the 2017 Australia Day (Invasion Day) rally in Melbourne where some 50,000+ people, including the artist with this banner, marched in recognition that Australia always was and always will be Aboriginal and Torres Straight Islander Land. I make these works as a way to materially manifest my solidarity and to, in my own small way, raise awareness and discussion about these issues within my own sphere of influence.
In March 2018 I auctioned this mini-protest banner, raising $560 for Children's Ground, which is an Indigenous charity dedicated to ending entrenched disadvantage in indigenous communities in Australia’s Northern Territory. For more information or to donate please visit: https://www.childrensground.org.au

This project was designed to encourage makers to create small handmade affirmations and placing them for strangers to find in public places, and in doing so spreading a little kindness.
To read more about the project visit: http://youaresoverybeautiful.com

For more information on this project visit: http://craftivism.com/blog/tag/yasvb/